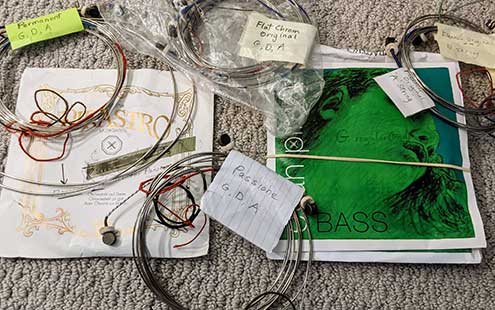 Every double bass sounds different. Some can be dark and rich and full of bass tones and body. Others might ring out with pizzicato and thrive in the midrange. Other double basses might be perfect for solo playing, with loud high end pitches that scream.

Note: This document will be updated as the project progresses.

Strings can enhance or exacerbate the sound characteristics of an instrument. They can alter the playability as well. The optimal string setup should have the following characteristics:

We are going to focus on classical arco qualities for this experiment, but will take into account pizzicato as well.

To test string qualities evenly, I will run each string set combination through a test suite. Each suite will be recorded.

The subject of this experiment is my double bass, an unlabeled German instrument built probably around 1904. This bass has been played in the Minnesota Orchestra and the Chautauqua Symphony Orchestra before I owned it. It has had extensive resoration work performed and is in a good state at the moment.

The current set of strings is Bel Canto EADG. I find the ADG strings to be a bit "floppy" and would like something more responsive to the bow. The E string is actually decent sound-wise, and feels fairly good for playability. I may modify the experiment later to retur to more use of the Bel Canto E string later on, if the Flexocor Deluxe E doesn't improve the overall sound for these sets. I also have a Flexocor standard E to try out.

Before the experiment begins, I will calibrate the string height to ensure the G string height is 4-5mm and the E string is at 7-8mm. This bass has no C extension at the moment, but a C is planned for the future.

Here are some raw notes from my double bass instructor, Stephen Tramontozzi.

On my bass at the SF Symphony and on my Italian basses: Pirastro Original Flat-Chrome purple and white windings - speak quick, comfortable under left hand, a bit more body, because they have an extra wrap. the more wrap, the darker the sound. but in some cases the set E isn't balanced, so you might want to try something else.

On my English bass - Evah Pirrazzi, synthetic gut core, flatwound steel. Really great sound. I use light gauge on G, some people go light on both G and D. These strings are really thick so they might not feel comfortable.

Passione strings: Some people really like these. Medium is too light. Go heavy on those. (Joe note: I used a solo set a while back and they were pretty good.)

Charles Chandler uses Bel Canto on A, D, and G, and a Flexocor Original on the low C.

The variables for this experiment are strings. I have the following prepared:

All strings except the Bel Cantos, Flexocor Standards, and the Flexocor Deluxe were loaned to me, and are not new. I the Flexocor "Standards" are just labeled "Flexocor", and I use "Standard" here just to differentiate from the ones that are actually labeled "Original" and "Deluxe". The age of the strings may affect responsiveness, but should at least give a good idea of tonal quality and playability.

To start with, I will test these string sets in roughly the order shown in the table below. This is not a complete list of options given the inventory of strings on hand, but it would be time-prohibitive to test every single combination. Instead, I assembled this list as a best guess of what would a) sound good, and b) provide the best initial data. If additional experiments are needed with alternative string combinations, I will add more to the list as the experiment progresses.

Record each set. Play multiple times or repeat segments if it is necessary to explore tone or responsiveness.

Create a form that will rate each set on a scale of 1-5, 5 being best.

For each set, rate the following:

Additional qualitative notes on each set are added here.

This is the existing set. Sound overall is even. String tension feels a bit floppy. Strings sound kinda dark overall. Easy to play. Sound good with pizzicato. Not very responsive.

Flexocor is notably louder and punchier than the Bel Cantos. Sounds a bit metallic by contrast. Not an even sound at all with the Bel Cantos - too much contrast.

Actually more even sounding between the Flexocor and the Pirazzis. The Pirazzis go out of tune much easier than anything I'm experienced with. They definitely sound a helluva lot louder on this bass than anything I'm experienced with as well. They ring. I coughed and I could hear sympathetic ringing. Sound a bit scratchy, raspy, but if I compare this to Bel Canto, the Evah Pirazzis win on this bass. Sounds like an old viol. They are definitely harder to play than other strings - more tension and thickness I think. I can feel it in my wrist.

Sounds similar and slightly brighter to the Bel Cantos, but overall they sound sort of muffled. Similar playability to the Bel Canto set; feels very comfortable to play, speaks well, just lacks a lot of the color and projection that the Evah Pirazzis and Flat Chrome sets have.

Final analysis report will appear here at the conclusion of the experiment.